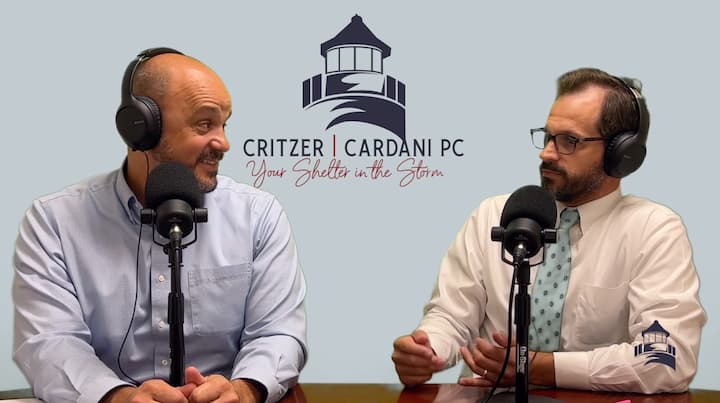 Ticketed with CDL in Virginia…

Follow the What To Do When… Legal Chat Podcast – Proudly Featured On:

What To Do When… Intro 00:01
Welcome to What To Do When… A podcast from real lawyers with real perspective, where we explore a variety of legal issues and scenarios. Each week we focus on a new topic and discuss what to do when and if any of these legal scenarios ever happened to you or a loved one. With over 40 years of combined legal experience, our hosts offer their unique perspectives and insights on a range of real life legal situations.

Hello, and welcome to another episode with Critzer Cardani. Here in Richmond, Virginia.

What’s on the docket for today, Scott?

Scott Cardani 00:34
What To Do When… You’re ticketed with a CDL.

Will Smith III 00:38
Yes, sir. And in Virginia, right. If you’re a CDL holder, you’re a lot different than just your regular everyday driver.

Scott Cardani 00:45
Well, you probably had explained that folks, what’s a CDL? If you have one, you certainly know.

Will Smith III 00:50
Yeah – and I held a CDL at one point when I was in college as a truck driver. But it’s a commercial driver’s license. There are different requirements that a driver has to go through in order to qualify for one. There is a kind of like with your regular driver’s license, a learner’s permit and a training period. And then once you’re certified, you’re able to drive certain types of commercial vehicles.

Scott Cardani 01:12
Okay. So what happens when you’re ticketed? What’s the difference between ticketed with a regular driver’s license and a CDL?

Will Smith III 01:20
Well, the three main things I want to talk about today, the first off the two different types of violations, serious violations and major violations. And also whether or not you can do driving school like somebody else. Many somebody and you know, anybody else that has a speeding ticket or something like that, and have a good driving record, they can go before the judge and ask for driving school. And a lot of times the judge would give it to him. In Virginia now under the new rules, the CDL holders don’t have that same opportunity.

Scott Cardani 01:49
Wow. So what does that mean, when you’re ticketed in as a CDL driver? What’s the importance here? What are we trying to convey to our people?

Will Smith III 01:57
Well, the main thing is, I mean, they see CDL holders are going to face much harsher penalties if they commit certain crimes on the roads here in Virginia, compared to anybody else, if they do the same thing. Okay. So you know what I’m talking about it, you know, we have major violations, we have serious violations, your major violations are going to be DUIs, hit and run, reckless driving, refusal. So kind of the little bit more serious offenses that you know, that are that are committed out on the road. I guess the more major offenses, sometimes how they are categorized, you also have serious offenses. The serious offenses are speeding, improper lane change, reckless driving, following too closely and improper driving. So kind of the next teir down from, you know, the more serious crimes are driving on the influence, but still speeding or improper lane change, or if there’s an accident, you know, you’re gonna get ticketed here in Virginia.

Scott Cardani 02:52
And what is that ticket mean? There’s a major and serious differ in your punishment. Is that the deal?

Scott Cardani 03:43
Okay. So, you you have these two different tiers of violation. What else do we need to know about?

Will Smith III 03:51
If you have a second violation, a major violation, you’re going to be disqualified for life. So it only takes two.

Scott Cardani 03:58
Wow, oh, my gosh. So if you’re a truck driver, and you get these serious offenses, you could literally lose your career.

Will Smith III 04:03
Lose your career. Yeah. And everything that you put into it.

Scott Cardani 04:06
Yeah. And that’s one of those things about Virginia that most people don’t really understand. And it can really affect you, if you don’t know the law. So anything else? Well, that you want to talk about CDL?

Will Smith III 04:16
Well, the other I guess, the other side of it on these serious violations, your license is gonna get suspended. If you have two violations within three year period, your license to be suspended for 660 days. So you know that, again, if you’re working as a commercial driver, and that’s the way that you, you know, earn money, if you’re out for two months. I mean, that is that’s two months worth of rent, that’s two months worth of bills, it’s two months worth of pain, you know, for your kids at school. You know, so it’s not like, I mean, it’s a privilege to drive right, we all have the privilege to drive. But, you know, the CDL holders are held to a much higher standard than, than your regular driver. And so the, the effect that it’s going to have on them is going to be significant. If there’s an Other if there’s if there’s a third offense serious offense within a within a three year period, then your license can be suspended for 120 days. And eventually DMV can take it upon themselves to continue to drive unsafely to just again disqualify you altogether.

Scott Cardani 05:14
Let me ask one more question I just thought about this is, if you have a DUI is at the same standard for DUI, is it the same .08? Is there a different standard?

Will Smith III 05:53
I mean, I mean, think about if you’re driving a big 18 Wheeler, and you’re been you’ve been drinking or doing drugs, and so you get a DUI DWI, under the influence, then it’s going to be a much harsher penalty.

Scott Cardani 06:10
Especially current beers, or a glass of wine. So basically, the thing is, if you’re drinking and driving a commercial vehicle… you are probably going to lose your license.

Scott Cardani 06:25
I think we gotta go back and do it. Let’s redo. I think we have to at least back up. I don’t know where we stopped though. Any place, we could stop that we could do it.

Scott Cardani 06:39
Okay, start from. Okay. So well, I have a question. What about DUIs a standard different?

Will Smith III 06:49
It is, the standard is different if you’re operating a commercial vehicle, okay. So in Virginia, for a regular driver on the road, it’s point away is the is the legal limit. As a commercial driver, if you’re driving a commercial vehicle, and you’re stopped on suspicion of drunk driving for any other reason, and you blow .04. Then it is going to be you know, the same. Well, actually more more serious offense, obviously, if, if you’re drinking and driving while operating a large vehicle.

Scott Cardani 07:18
So remember, folks, I mean, .08 are easy enough to hit. If you’re pointing down to .04, you’re talking to beer or 2 and you’re registering. So if you drive for commercially for a living, you really got to be understanding what the laws are going to need to series offenses, you need to understand major offenses. And so what happens if they get stopped, or ticketed, as we’re saying?

Will Smith III 07:41
If they get stopped, I think the main main thing they need to do is realize that whether they’re driving their personal vehicle or their commercial vehicle, it’s going to have a pretty significant impact on their livelihood. So I, I tell people all the time you no matter what the offense is, to probably talk to a lawyer and see somebody. For these especially I mean, if you were trying to avoid getting convicted two times in a three year period, right, and lose your license for 60 days, or 120 days or for a year, you know, it is important to talk to a lawyer that deals with serious traffic offenses, major traffic offenses. To help navigate through that court system and get you the best outcome possible. Because as I was saying earlier, you can’t take driving school just like the regular drivers.

Scott Cardani 08:25
Three takeaways are that if you have a major violation, If convicted, you’re gonna get your license suspended for at least a year. I’d say the second is that if you have to major about two serious violations, so that’s like I said, speeding, reckless driving within a three year period, you’ll get your license suspended for 60 days, up to 120 days if you continue to have those type of serious violations. And lastly, if you are going before a Judge, you can’t ask for driving school just like the everyday person coming in there. You are going to be held to a much higher standard. And you’re not going to have that ability just to have your matter dismissed or reduced by completion of a standard eight hour driver course. Yeah, and folks, that’s really important. You need to know that you cannot take driving school to get out of the ticket. So you need somebody who’s going to advocate that’s what we do here at Critzer Cardani. We’re going to advocate for you. It’s really important. And again, as we always say in these stops, you have no obligation, no obligation. I know I feel like a broken record. But you really need to learn this, you have no obligation to incriminate yourself. So when the officer stops you and says I’ll start asking all the questions you have license, registration, proof of insurance. That’s all the questions you need to answer. Be really careful about that. Hi, say, hey, with all due respect, I’d like to talk to an attorney before I discuss this any further. They understand the deal. So Will, what are three takeaways from the day. Alright folks, that’s it. Thank you for joining us. Remember to subscribe and like and come see us at Critzer Cardani.

What To Do When… Outro 09:52
We hope you’ve enjoyed this episode of What To Do When… For more episodes, be sure to subscribe to our podcast and we encourage you to check archives to listen to previous topics. Tune in next week for a new episode and some fresh perspective from Critzer Cardani.

We look forward to helping you in this venture and Good Luck!